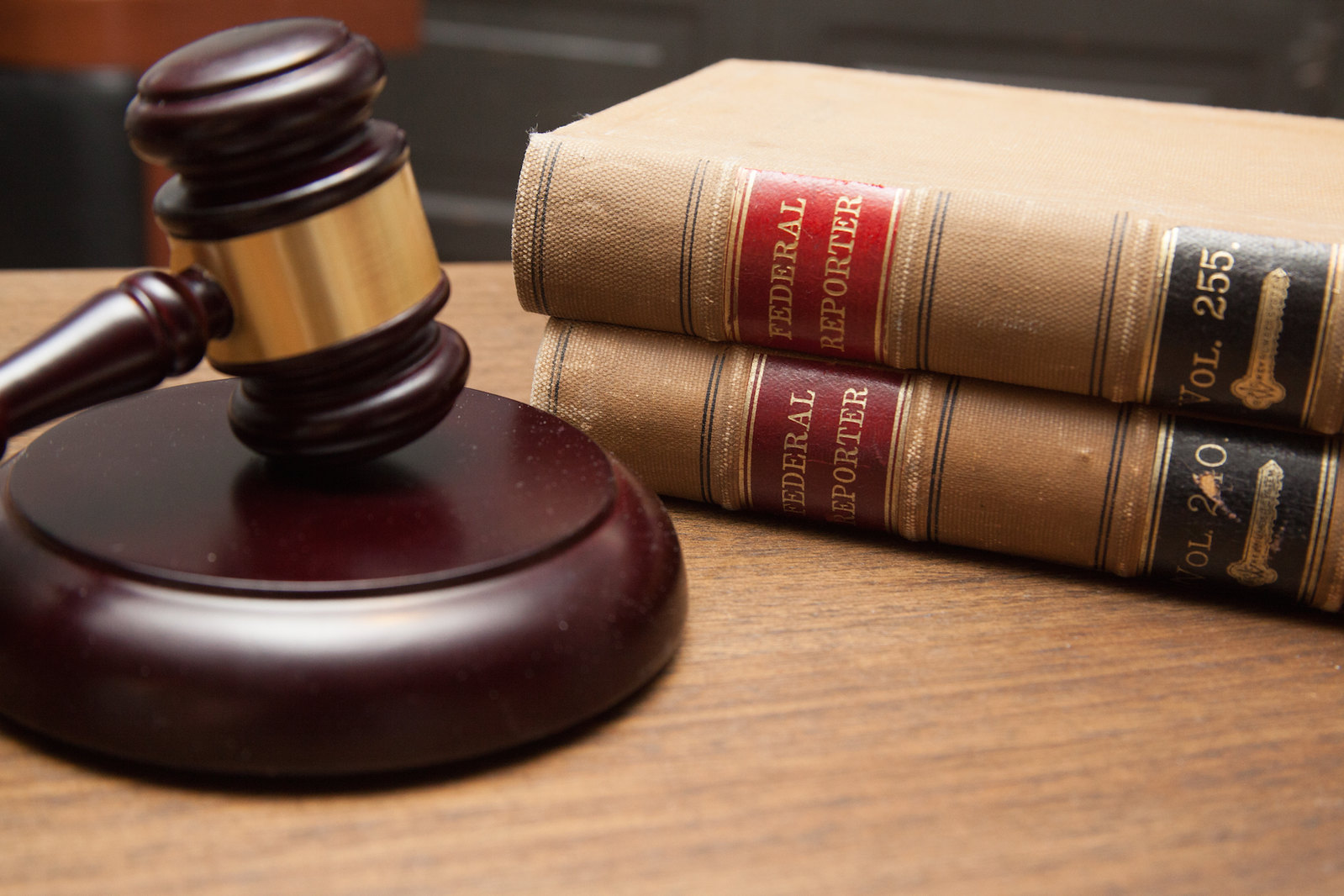 This is Part 3 of the series “Merry Microservices”

We’ll be building on the confidential note service from Part 1 and the UI gateway from Part 2 but we’ll further our authorization, beyond what OAuth 2.0 provides, by calling a “policy service” where application-specific permissions are managed.

The source can be found on github at https://github.com/sdoxsee/merry-microservices/tree/part3.

In order to keep this introduction short, I recommend you first read “Stop overloading JWTs with permission claims” as it provides the rationale for going this route for authorization.

But here’s a quick summary:

We want to keep role and permission claims out of our JWT OAuth 2.0 access token because it should only be concerned with “identity authorization”. However, “identity authorization” isn’t enough because it’s only what the user has authorized the application to do on their behalf–not what the application authorizes the user to do! For that, we need more granular authorization and permissions in our application. Or, to avoid building the same services over and over, we’ll use a centralized “policy service” that we call from our applications that answers whether or not a user has a given permission.

So, what “policy service” are we going to use? Well, there’s the community version of PolicyServer for .NET but that won’t work with anything other than Microsoft. The commercial version could serve our purposes but it

As a result, I built my own with JHipster that I hope to make a hosted SaaS soon and/or open source. We’ll be interacting with that for the duration of this post.

Off the top of my head, we have a few approaches to authorization in Spring Security:

I think usually you’d use #1 (route-based) for OAuth 2.0 scope authorization. I’m not a big fan of #2’s (method-based) @PreAuthorize because I find it SPEL awkward and limiting. #3 can be very expressive and testable allowing us to use policyService responses to control access and/or filter results.

Previously we only let Spring Security filters determine if we should return a “401 Unauthorized” or not simply by validating the JWT access token. Perhaps we should have also added route-based configuration to enforce scope authorization by ensuring that a scope like authority-note came with the access token or resulted in a “403 Forbidden” response. Although we’re not going to do that in this tutorial, here’s what it would have looked like:

Instead, let’s go a bit futher by introducing a PolicyService client bean that will query our “policy service” application for more specific permissions in whatever way we decide to use it (be that route-based, method-based or imperatively).

In the PolicyService class, we

Now we can modify our NoteHandler to use our PolicyService. For this post, we’ll just zero in on the all method that returns a Flux of Note objects in a Mono<ServerResponse>. After we inject our PolicyService, our all method looks something like this:

By the way, I’m pretty new at coding with Project Reactor so pardon my style and please leave a comment with any suggestions or improvements! For reference, the equivalent non-reactive code would look something like this:

In any case, we now have a PolicyService client and we’re using it imperatively in the all method of our NoteHandler to provide both

Note: To be clear, the default response from hasPermission calls to the “policy service” is false so that if a permission isn’t setup, we don’t get unexpected results in our applications!

Before we can setup the “policy service”, we need to start it up along with Keycloak. We’ve added a new policyservice service to the docker-compose.yml to make it easy to start.

If we go to http://localhost:8080 (where it should be running), we can login with username admin and password admin. The admin user is the only user in the default JHipster realm configuration for Keycloak has been given the identity role of ROLE_ADMIN (in addition to ROLE_USER) that our JHipster “policy service” needs to manage entities.

Setup our a note policy for our existing note service

Once we’re authenticated, we need to add a note “Policy” entity that creates a namespace in which we can add “Role” and “Permission” entities for our note service. 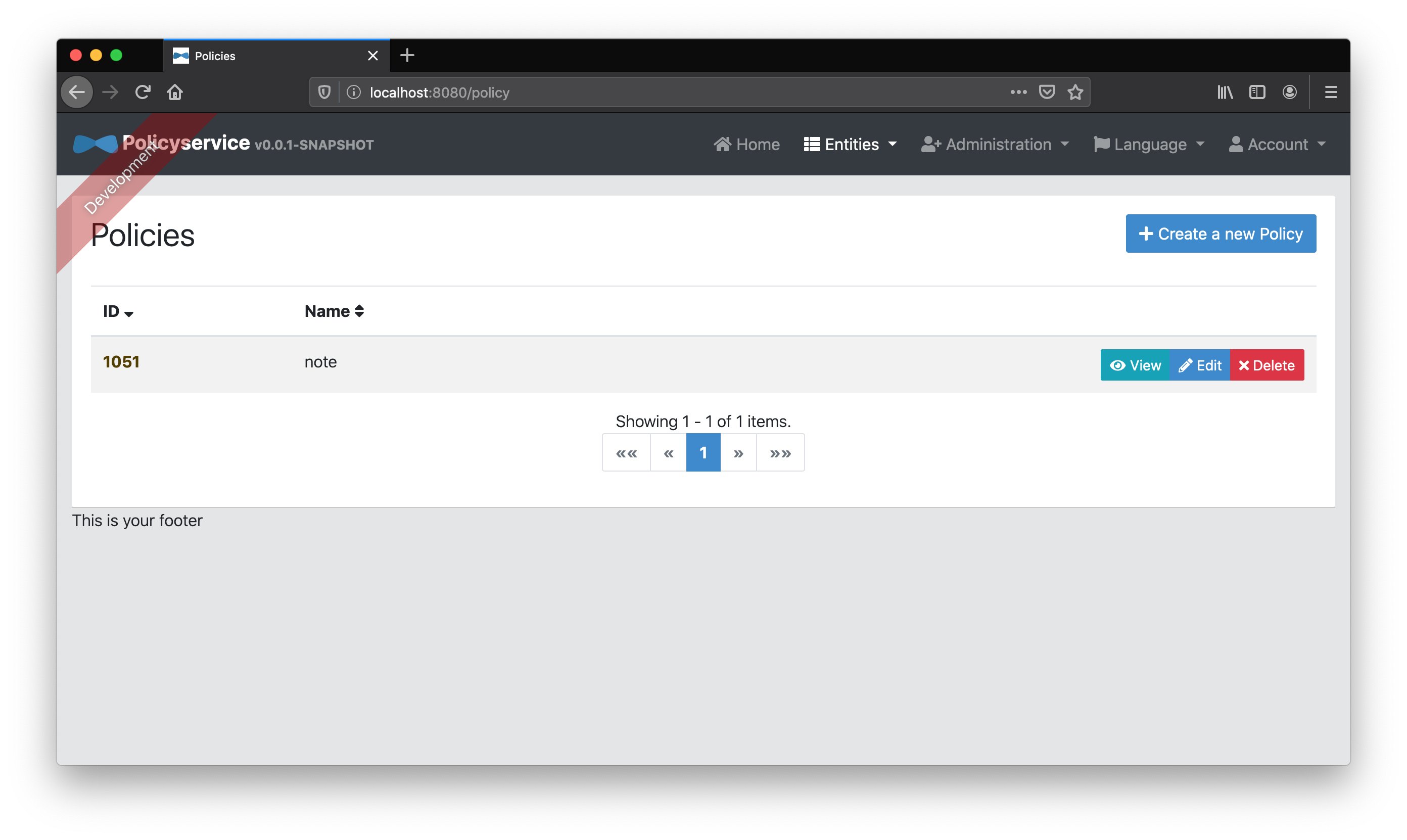 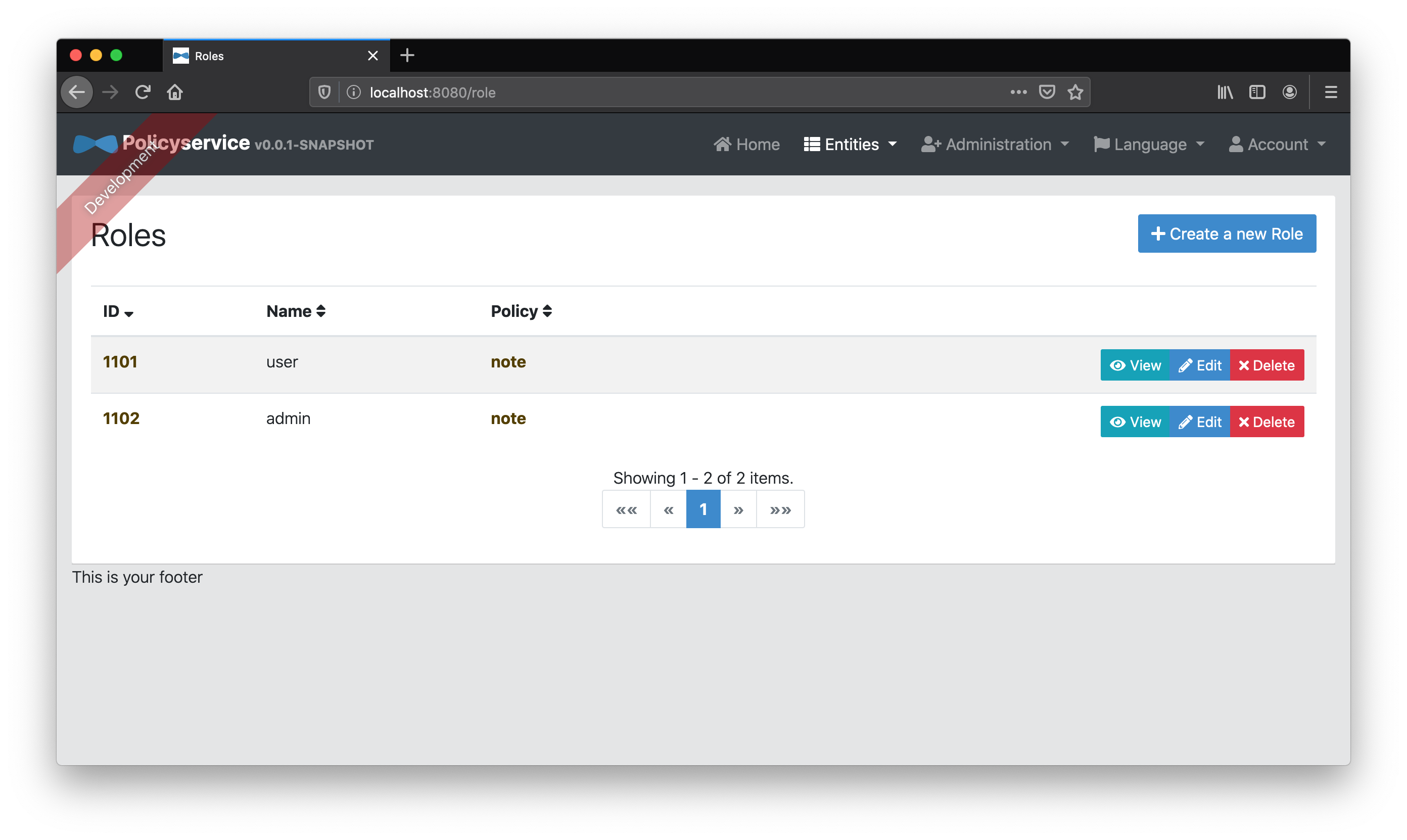 We’ll then add two “Permission” entities, CanRead and CanReadConfidentialNotes, and associate them to the user and admin respectively. 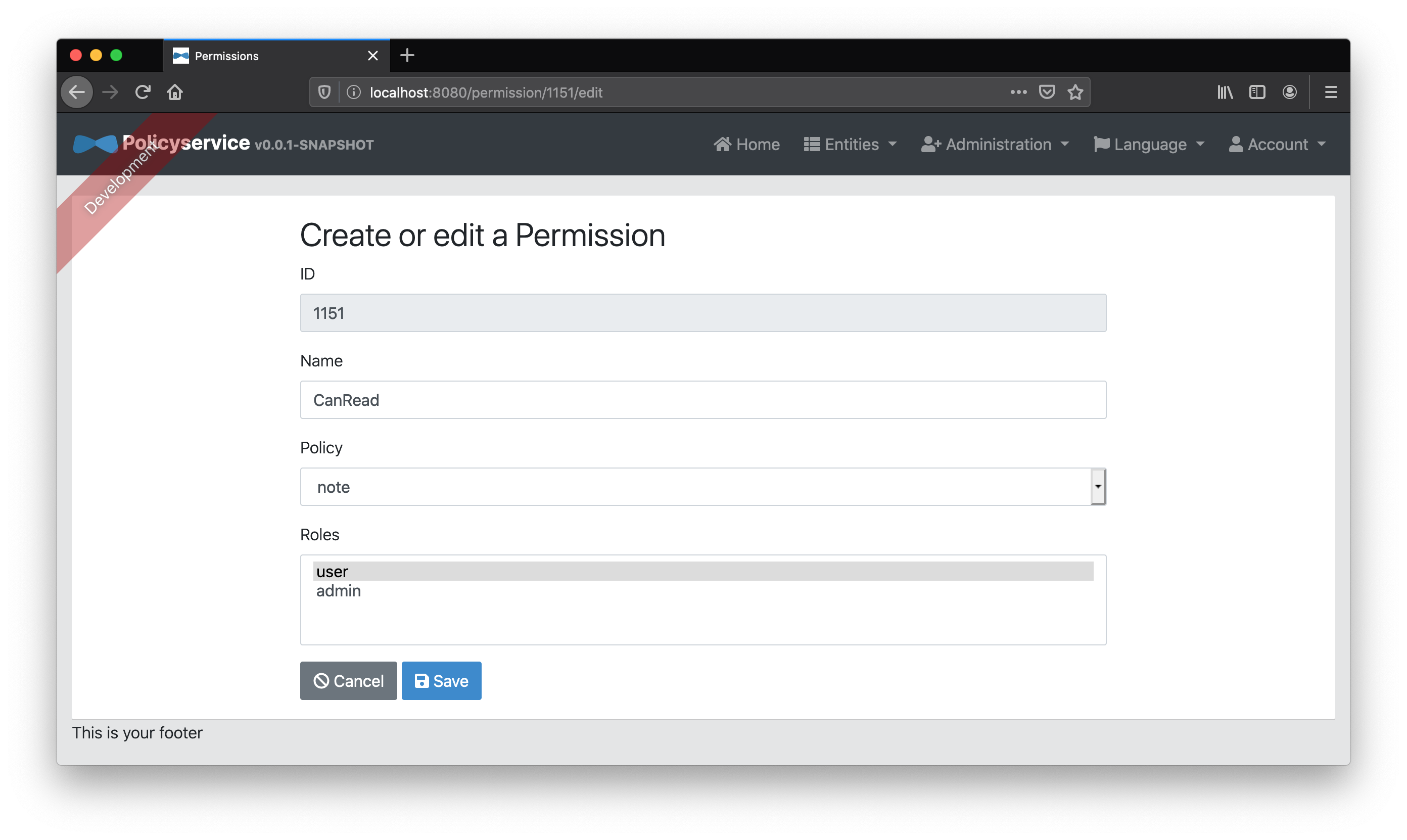 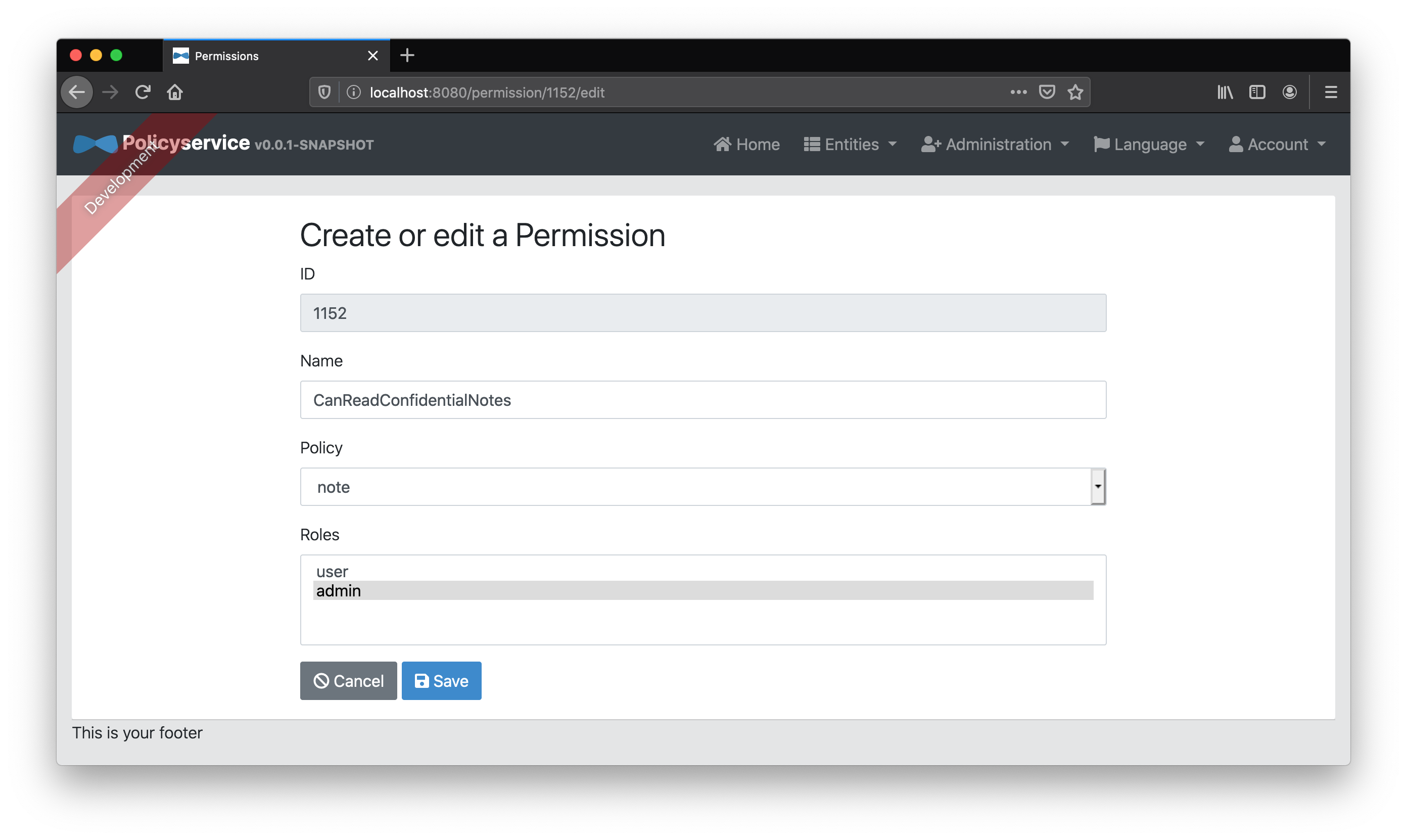 Finally, because we’re lazy and don’t want to get into the batch provisioning of specific user roles and permissions, we’ll create two “Identity Role” entities, ROLE_USER and ROLE_ADMIN, and map them to the “Role” entities user and admin respectively. These identity roles will match those coming from Keycloak’s JWT access token and allow us to map default “Role” entities to any user with those identity roles. 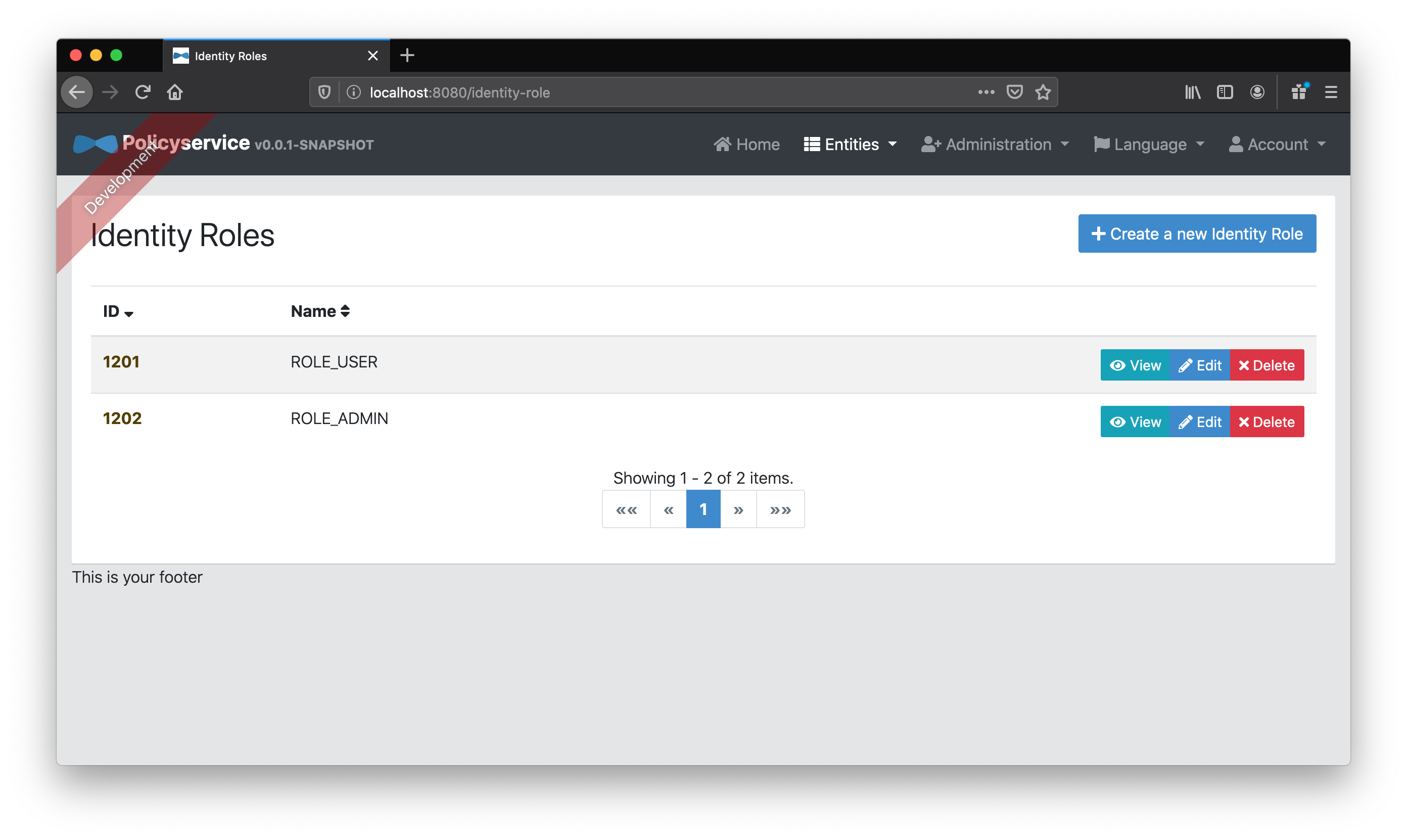 Note: Before we go any further, we need to make a small tweak to note and gateway. These applications haven’t been running in Docker containers so they could reach the exposed Keycloak Docker container (named keycloak) at http://localhost:9080. Since, to a Docker container, localhost means “the same container”, our “policy service” that is running in a Docker container, isn’t able to reach keycloak at http://localhost:9080 like the other applications were. So, policyservice needs to reach Keycloak via its service name keycloak. But, our “policy service” needs to be able to reach Keycloak not only via backchannel (server to server), it must also be able to it frontchannel (in the browser). Changing the issuer of our “policy service” to reference keycloak breaks the browser redirection because, unless you add it to your machine’s hosts file, it’s unrecognized. So, we make keycloak recognizable. We also need to change application.yml for both gateway and note to use keycloak instead of localhost so we change the value for spring.security.oauth2.client.provider.keycloak.issuer-uri accordingly. If you don’t, the issuer in the JWT will be considered invalid and you’ll get “401 unauthorized”.

Now, without any code changes on our UI gateway, we should already benefit from the changes made to the note service and our configured policy service. If we were to log in as admin, we’d be able to view all notes–confidential or not. If we didn’t get assigned the identity role ROLE_USER on Keycloak, we wouldn’t be assigned the CanRead permission and would therefore get a “403 Forbiden” on the /api/notes GET call. If we do have the identity role ROLE_USER on Keycloak, we’ll get a filtered list of only non-confidential notes because we don’t have the CanReadConfidentialNotes permission.

Try it out with admin and user users and you’ll see the difference. Cool eh?

But why should only the note services get policies? What about the UI gateway? We should be able to give each application has its own roles and permissions. The authorization concerns in the UI gateway might overlap with those of the note service but it probably has its own distinct ones as well. For example, say, hypothetically, that we wanted Canadian users (not based on locale or IP but via a role) to have a specific UI experience. Since Canadians (also sometimes called “Canucks”) love snow, we might want to add a snowstorm effect when they’re logged in :) 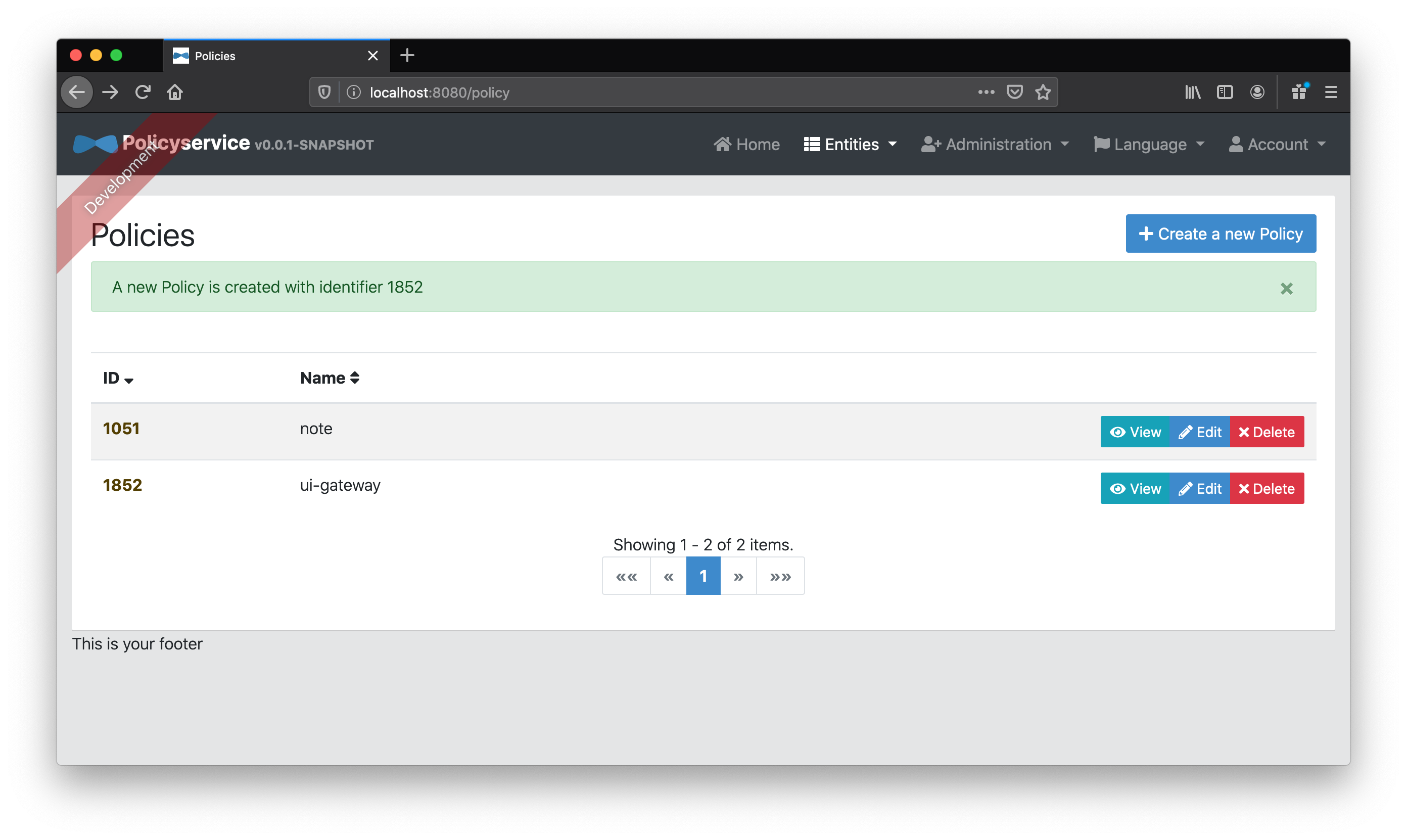 Next, we’ll add our canuck “Role” entity belonging to the ui-gateway policy. 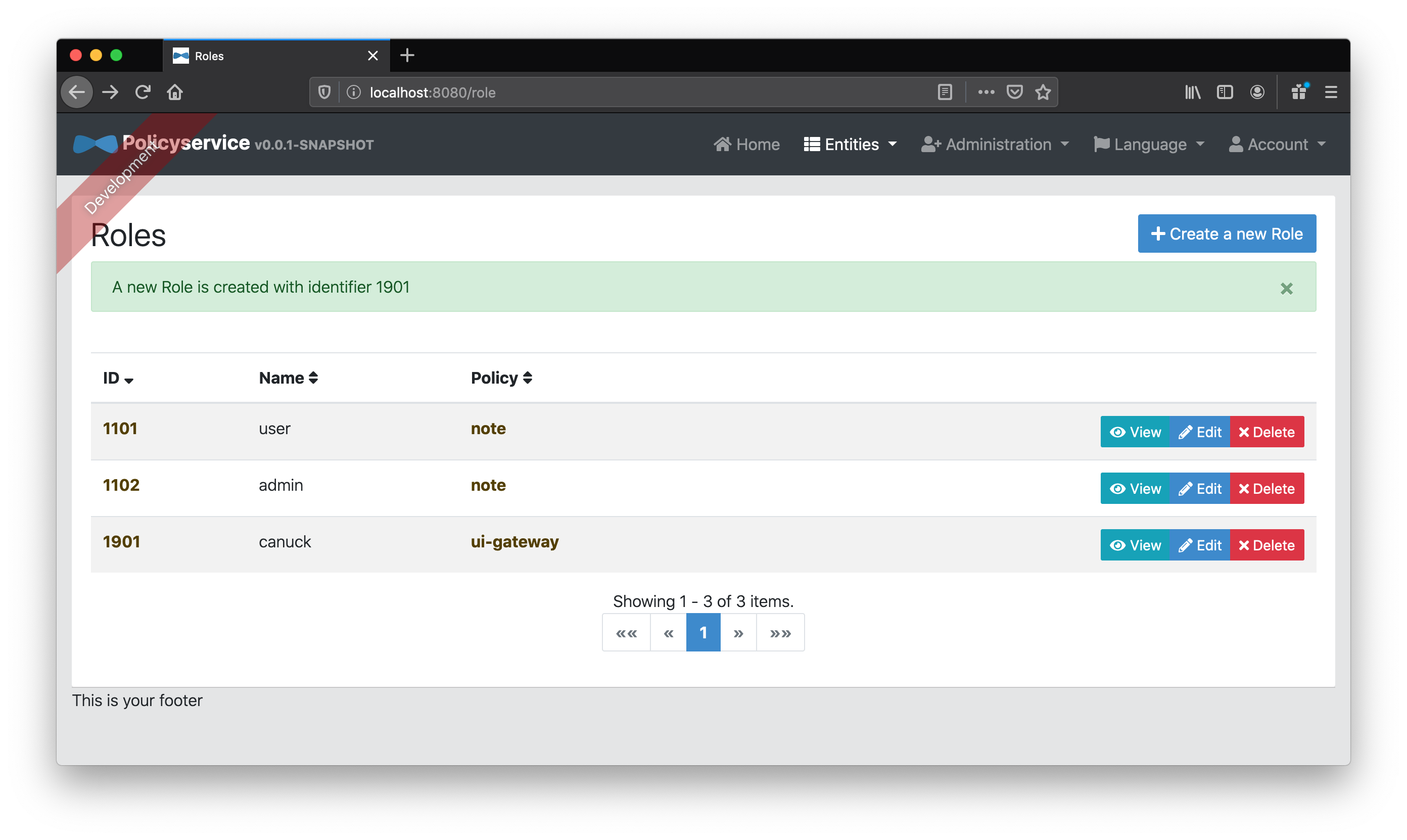 If we add a Snowing “Permission” entity associated to the canuck “Role” entity, then we’ll be able to use that to determine if we should show a snowstorm in the UI! 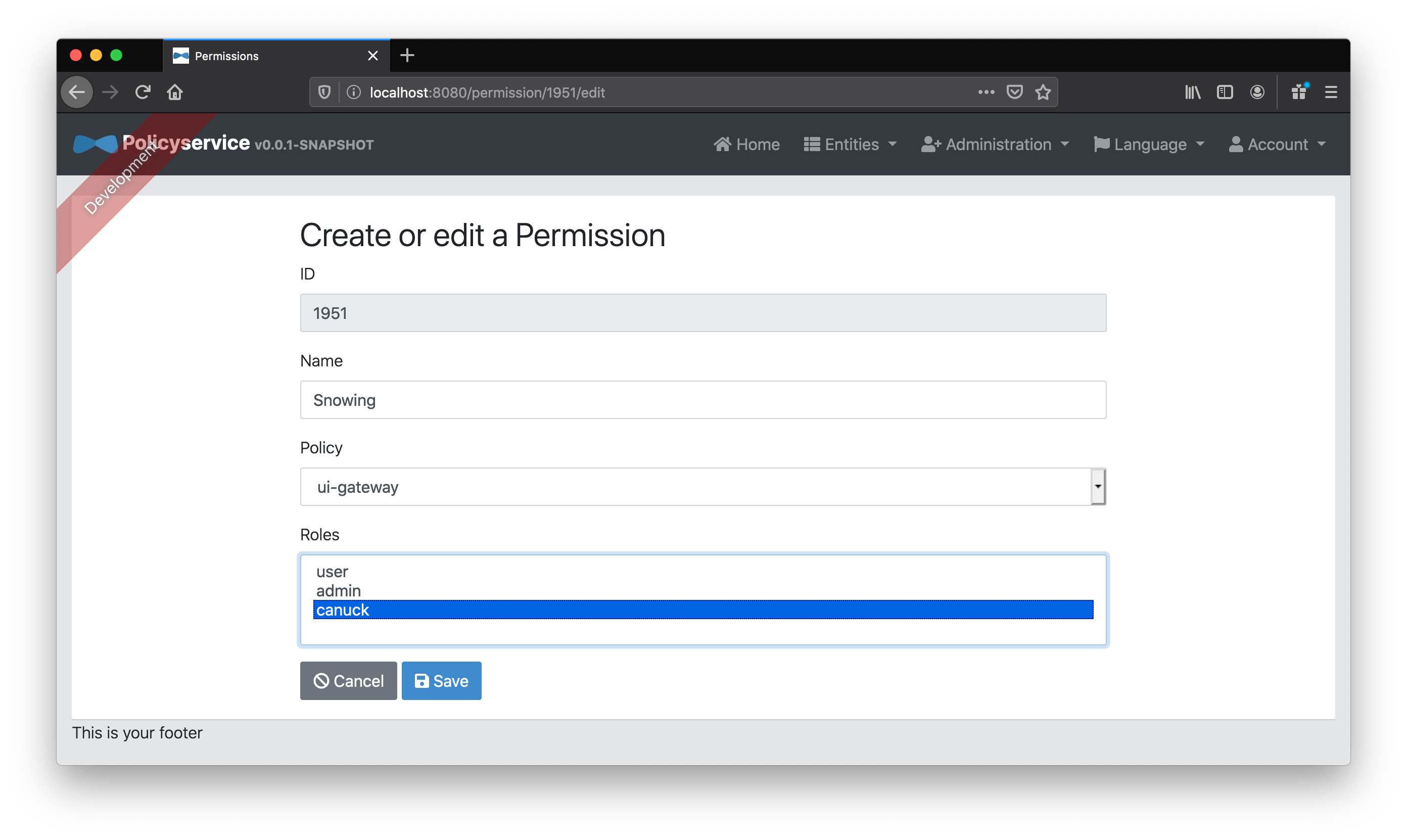 Now, how will our Keycloak users get this new canuck role? We could either

Chosing the second option for simplicity, let’s blindly map all ROLE_ADMIN to canuck “Role” as well as the existing admin “Role”. 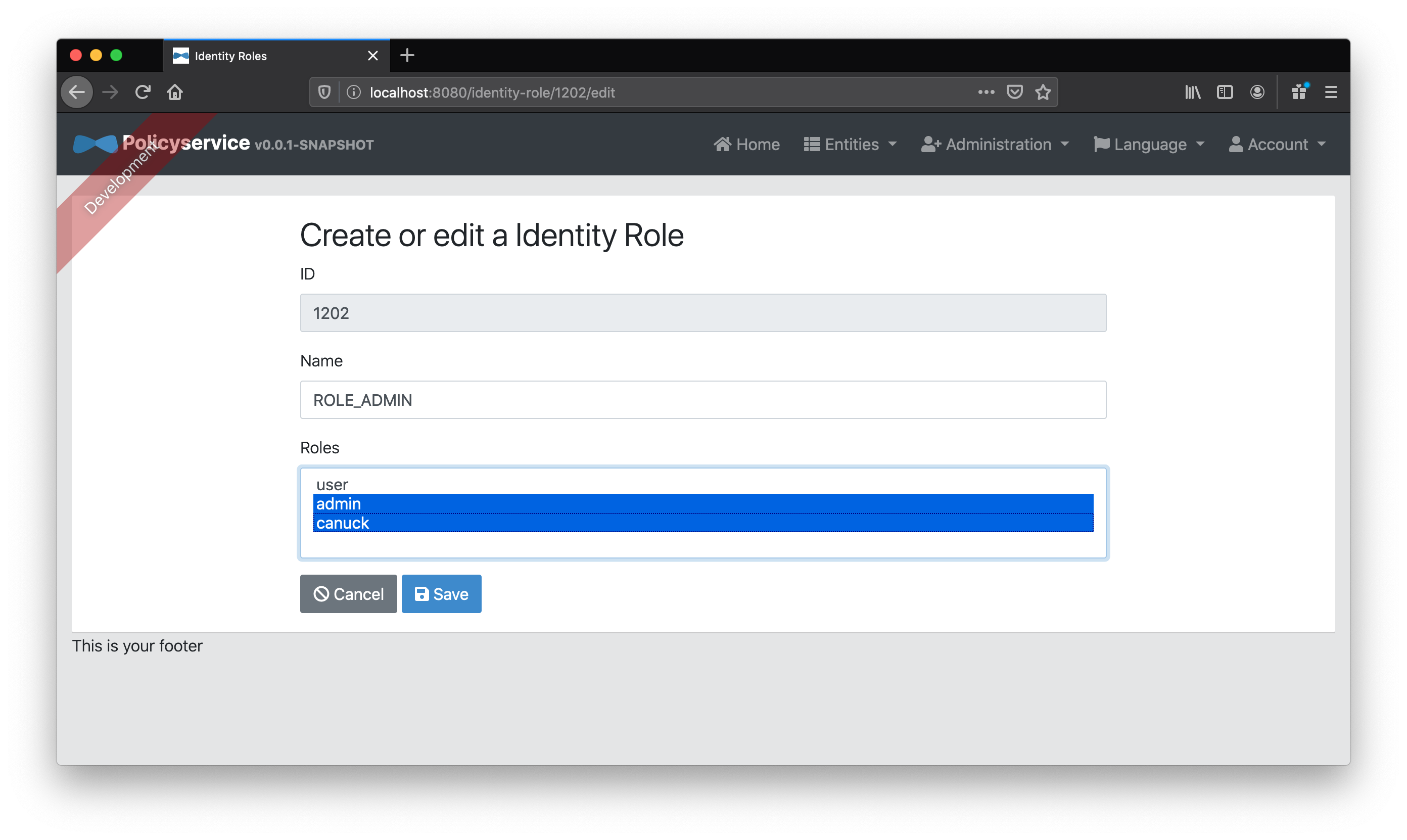 How would we call the “policy service” from our React app to check those permissions we just setup? We’ll make our Spring Cloud Gateway backend proxy and relay calls along with our access token to the policy service. First, let’s add a route to our application.yml under spring.cloud.gateway.routes:

Tip: You’ll probably want to use a refresh token or else your calls will “401” after 5 minutes (the default access token expiry on the Keycloak instance). If so, you’ll want to add the offline_access scope to your client registration and, until an issue with TokenRelayGatewayFilterFactory is resolved, use an alternate GatewayFilterFactory that supports refresh tokens and refer to it, TokenRelayWithTokenRefresh, in your application.yml, as your filter instead of TokenRelay.

Now that our backend is configured, calls from our React UI, such as

will be automatically proxied along to the policy service with the access token set in the Authorization header!

Changing the React UI to use “policy service” permissions

Let’s change our React application to use our Snowing permission. In order to display our snowstorm, we first need to add react-snowstorm to our package dependencies by going to our src/main/app directory in a terminal and running:

Now that we have our new dependency, let’s use it in App.tsx:

Unfortunately, that’s not quite enough. Since react-snowstorm isn’t a typed dependency we can’t use it yet. We get the following error: 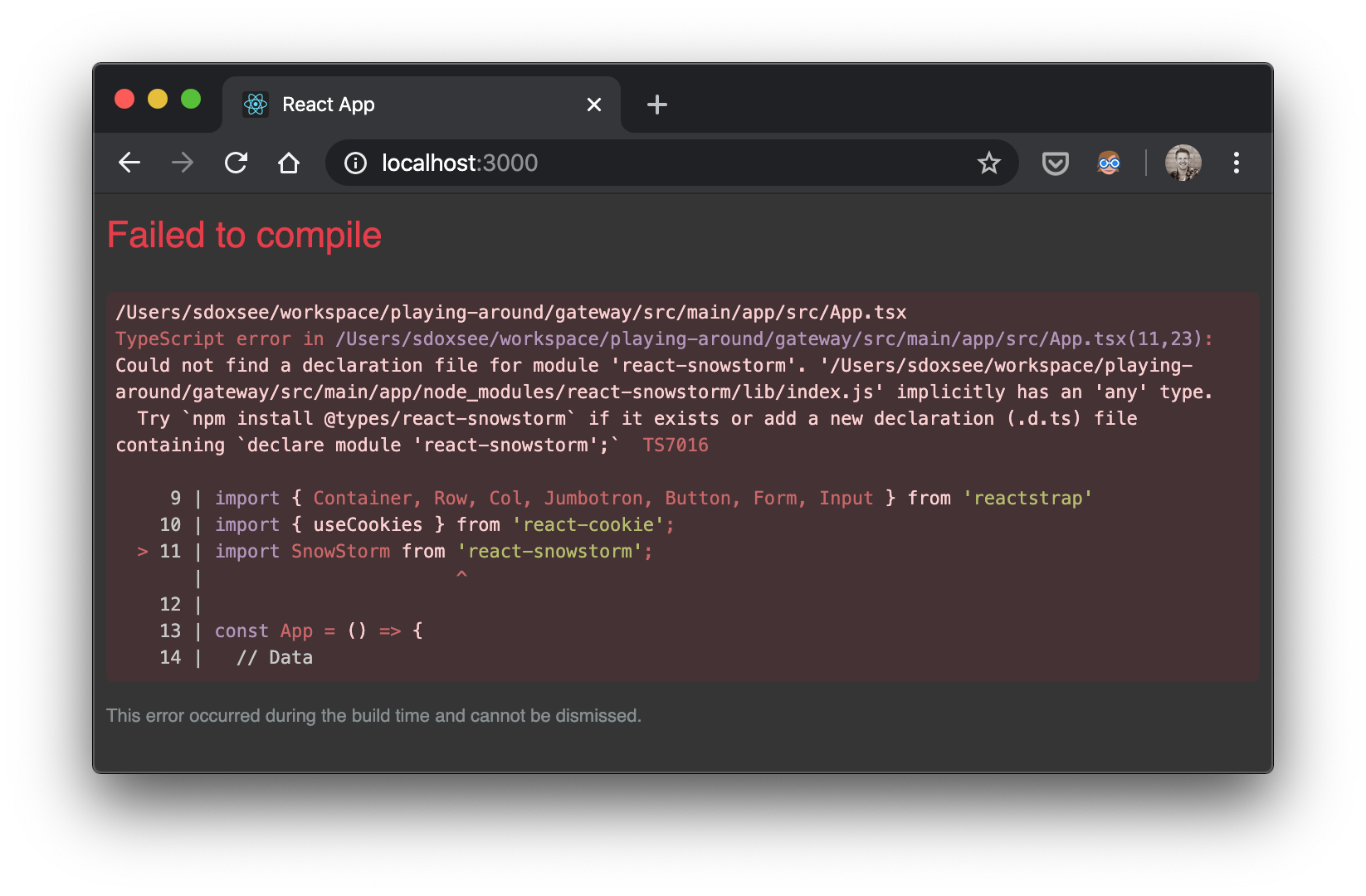 The easiest way to (satisfy)[https://stackoverflow.com/a/40211915/1098564] TypeScript is to simply add the following to src/main/app/src/react-app-env.d.ts–letting TypeScript know that the react-snowstorm exists:

Everything should be working now!

When you sign in with admin, you’ll see all notes and the snow storm effect. 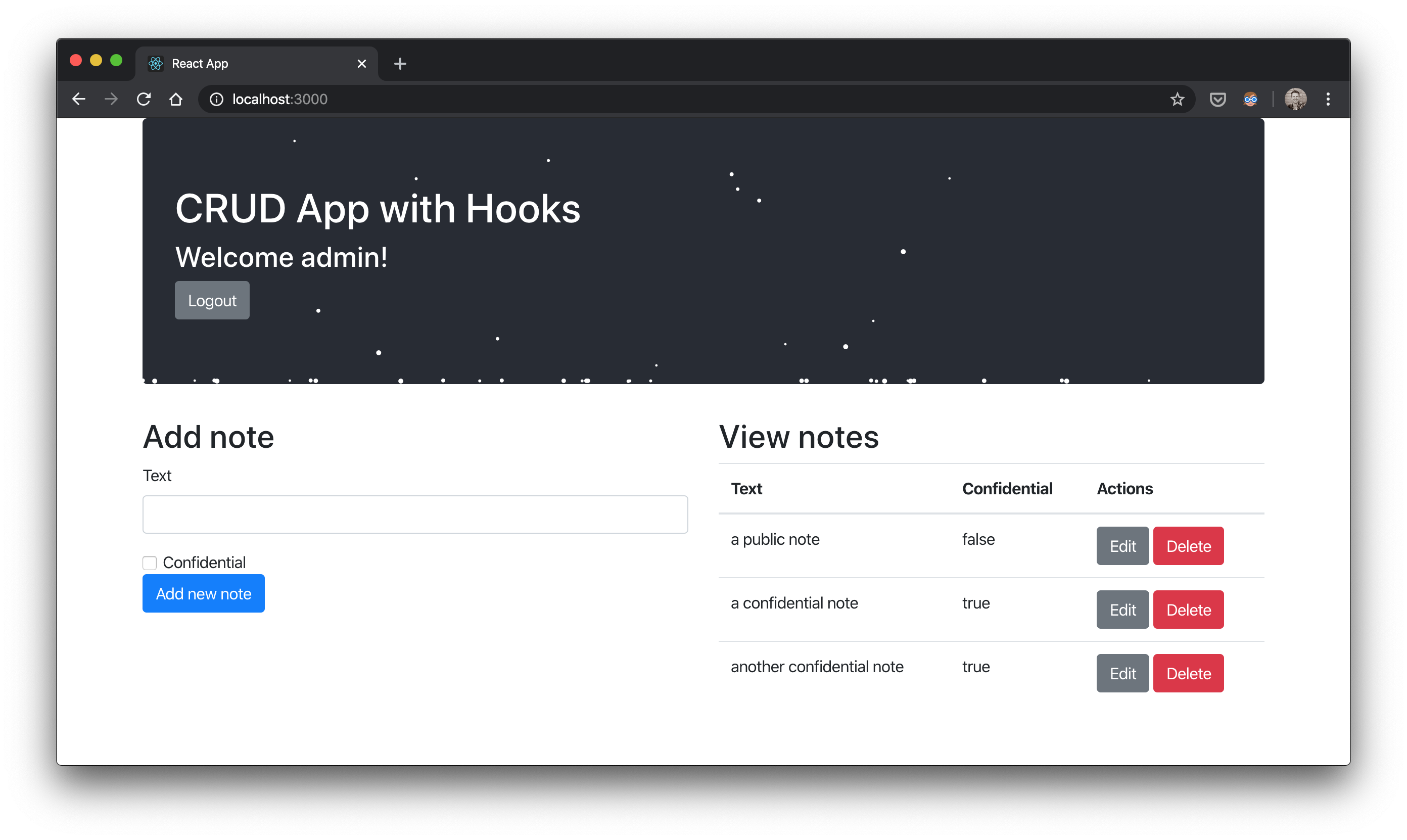 When you sign in with user, you’ll see only non-confidential notes and no snow storm effect. 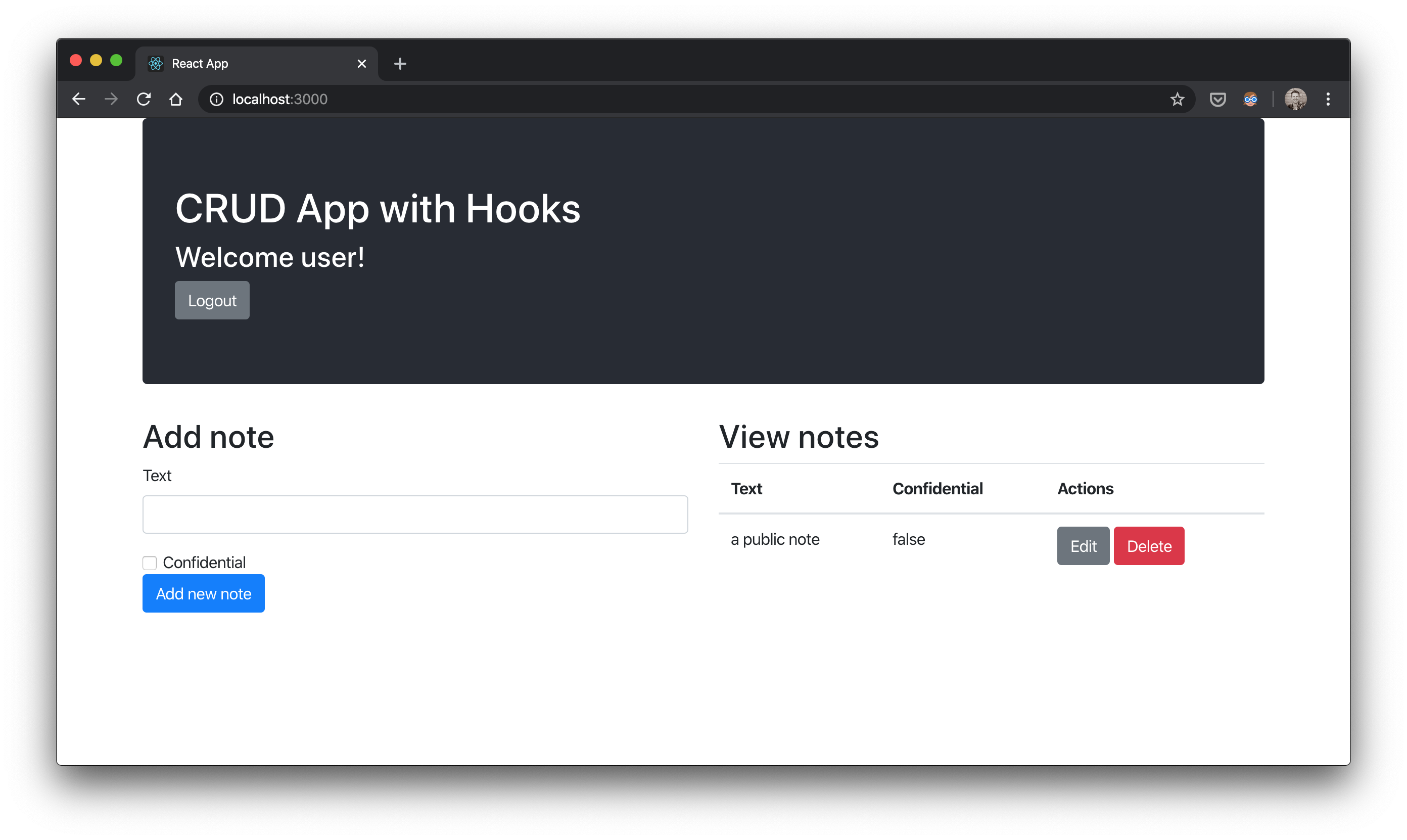 Now we’ve got a microservices architecture that scales, uses a pretty great stack, and employs a “policy service” to control authorization for application-specific permissions!

There’s still a lot that can be done though…

Still. Not too shabby!

There are more “policy service” features that we didn’t explore yet, including:

If you’re interested in using or contributing to the “policy service”, direct message me on twitter. I’m hoping to offer it soon as a SaaS and/or open source it.

In the next post (Part 4), we’ll show how you can get all of this with full CI/CD and running on Google’s Kubernetes (GKE) using Jenkins X!

If you’d like help with any of these things, find out how what I do and how you can hire me at Simple Step Solutions